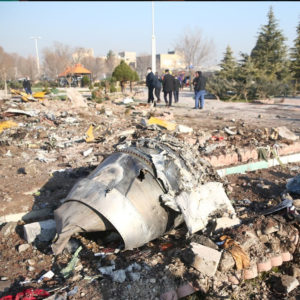 Plane crash that killed 176 people in IRAN, evidence reveals that itís connected with the US vs IRAN conflict

“We have intelligence from multiple sources, including our allies and our own intelligence. The evidence indicates that the plane was shot down by an Iranian surface-to-air missile,” Prime Minister Justin Trudeau said during a news conference in Ottawa. Although he added that it might have been an unintentional act.
While it is still too early to assume Trudeau have assured that all concerned intelligence groups are hands on deck on the investigation to determine the main cause of the plane crash incident.

63 were Canadian citizens out of the 176 victims died in the crash. “The news will undoubtedly come as a further shock to the families who are already grieving in the face of this unspeakable tragedy.” Trudeau said.

After an initial report that Trudeau told reporters that it was ìtoo early to speculateî about the plane crash caused by the Iranís attack, news starting circulating stating that satellite information indicates that the aircraft most likely was fired down unintentionally.

According to Trudeauî The evidence suggests that this is the likely cause, but we need to have a full and complete and credible investigation to establish exactly what happened. That’s what we are calling for and that’s what we’re expecting will happen”

The said information was ignited when the crash occurred just hours after Iran launched a ballistic missile attack on Iraqi bases housing U.S. soldiers. That was believed to be the response of Iran after the killing of Iranian military commander Qassem Soleiman, ordered by President Trump.

With all the theories rising about the crash being one of the effects of the US vs Iran conflicts, Iran officials have denied the allegation. Iran refused to agree that missile brought down Ukranian airliner that killed 176 people. 63 Canadians, 82 Iranians, 1 Ukrainians (two passengers, nine crew), 10 Swedes, 4 Afghans, 3 Germans. 3 Britons.

“Scientifically, it is impossible that a missile hit the Ukrainian plane, and such rumours are illogical,” Ali Abedzadeh, the head of Iran’s Civil Aviation Organization, was quoted as saying by the semi-official ISNA News Agency.

The Iranian aviation authority, amidst all speculations, said they have ìinvited all states involvedî ” to join a growing investigation team to produce a transparent result as immediate as possible.

While there are no solid details yet about the crash of Flight PS752, leaders from different countries who have lost citizens were gearing towards a thorough investigation and expecting to get an access to the crash site.

British Prime Minister Boris Johnson, whose country lost four citizens in the incident said he’ll also put full effort for an open investigation. “We are working closely with Canada and our international partners and there now needs to be a full, transparent investigation”.