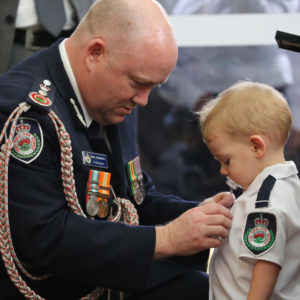 2 young children bid their last kiss to their fatherÆs funeral; both firefighters died while saving lives during raging bushfires

A young daughter Charlotte OÆDwyer bid her final goodbye to her father Andew OÆDwyer, a 36-year old firefighter and veteran of the New South Wales Rural Fire Service. Andrew OÆDwyer, was one of the volunteers during the wildfire incident who died saving homes and lives.

Mr OÆDwer died in December while braving the deadly blaze in Sydney when suddenly a tree rolled on his fire truck, alongside with him is another volunteer who were also killed, Geoffrey Keaton.

The firefighter hero, Mr OÆDwer was honoured during his funeral attended by hundreds of mourners, families, friend and co-volunteers.

It has been seen standing in front of his casket is his daughter Charlotte, wearing her fatherÆs fire helmet and service medal. Rural Fire Service Commissioner Shane Fitzsimmons was captured in many photos pinning her father’s service medal to her dress.

The Sydney Morning Herald reported what Fitzsimmons have told to Charlotte during the Funeral “Baby Charlotte, you need to know — your dad was a special man, a selfless man, and only left because he is a hero,”

Geoffrey Keaton, 32, as reported to be with OÆDwer who also died in the tragic incident, was also given an honour during his funeral. His 19-month old son, Harvey Keaton, received the medal for his fatherÆs heroism during the bushfire crisis. People cannot get enough of baby Harvey dressed in a firefighter get up with a pacifier in his mouth receiving the said award.

Both OÆDwyer and Keaton were awarded the posthumous Commendation for Bravery and Service.

As seen in some photos and videos, Australian Prime Minister Scott Morrison and his wife, Jenny attended Keaton’s service. Found on his tweet, “This morning Jenny will join me as we remember and give thanks for the life and service of Geoff Keaton at his memorial with his partner Jess, his son Harvey and all his family and friends, especially those from the Horsley Park RFS Brigade.”

According to CNN, David Littleproud, the countryÆs federal water minister also said ōa deeply sad day for the community, for the RFS (Rural Fire Service) and for their families.”