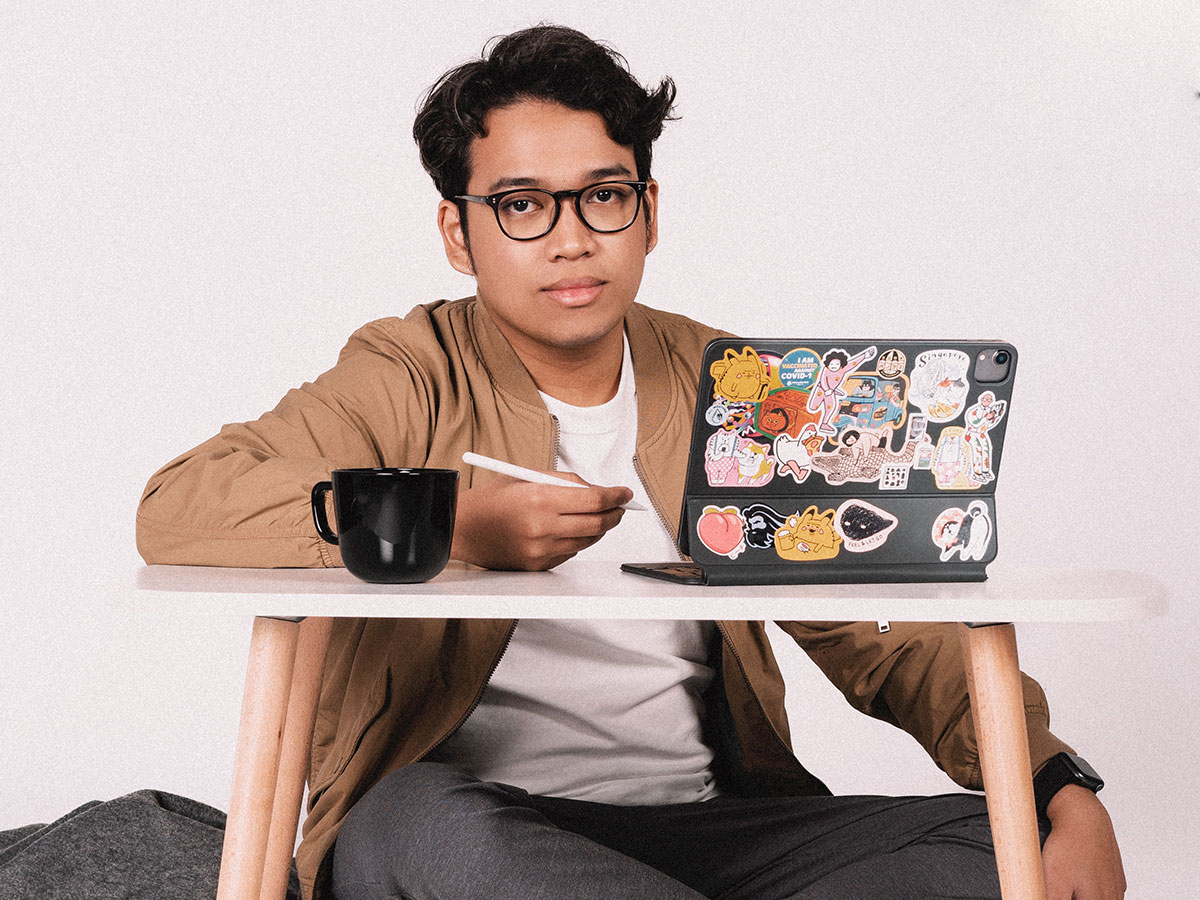 ‘You Can’t Satisfy Everyone’: Briandito Priambodo Talks Going Beyond His Comfort Zone

When it comes to creative work, all of us have our own culture, values, and opinions that end up defining and influencing our taste and preferences. For many creators, making art is a form of self-expression and an outlet for creative freedom. But what happens when negative feedback rolls in?

Briandito Priambodo, founder of The Tiny Wisdom, and Senior Product Designer at Grab, chats with Gen-Z Magazine about his creative habits, major milestones, internal struggles, and his journey thus far.

Unlike many artists who spend years developing and honing their craft, Briandito only kickstarted his creative career in early 2020, when he first began writing on his blog.

“In the beginning, The Tiny Wisdom was not intentional,” said Briandito. “One day when I was writing, I thought to myself I wanted to draw a comic. So, I drew it and posted it on Twitter. To my surprise, it got 10,000 likes and a couple thousand of retweets.”

Amazed at how people could relate with what he drew, he started focusing more on creating comic strips. He published his first comic on July 2021, “To Be a Big Fish in a Small Pond or a Small Fish in a Big Pond?”

The Creation of The Tiny Wisdom

Much of the creative pieces at The Tiny Wisdom revolves around practical tips for life and work. “The Tiny Wisdom is very personal to me. It’s based on conversations I’ve had with my friends, family, and experiences I’ve felt,” said Briandito.

When asked about how he came up with the name, “The Tiny Wisdom”, Briandito explained that the word “Tiny” comes from the idea of learning things little by little every day, and “Wisdom” comes from the values and lessons he picked up from people, books, and conversations along the way. “There’s another part to the name,” Briandito chuckled. “I have to be realistic. I have to find a name that’s available on Twitter, Instagram, and also the website.”

Stepping Out Of His Comfort Zone

Since young, Briandito enjoyed drawing but shrugged it off due to his self-doubt. “I didn’t think I was good at drawing because I felt like there were so many people better than me,” said Briandito. “I wish I could have been braver earlier so that I can do this longer by now.”

Initially, Briandito found himself struggling to publish his works, in fear of  people’s perceptions towards him. He shared that there were times when people tried picking a fight with him in his comments section, disagreeing with his art. “When you’re creating content, some people will like it and some people won’t. Sometimes, I don’t know how to deal with people who disagree with me, but I’ve been trying to improve myself little by little.”

When asked what comes first when he creates a comic, he shared the elements of his creative process, saying, “It always starts with an idea, a sentence, or a quote. Or sometimes, I take inspiration from song lyrics. From there, I start to expand on my idea further.” For him, expanding an idea can take up to 2 hours and the drawing process can take up to 4 to 6 hours a week to complete. “When I get creative block, I always push forward with it. I mean, I don’t stop. I’ll pick another idea or do another story, I’ll keep trying.”

He shared a motto he recently came up with that he uses often in his comics, “It’s not going to be easy, but it’s not impossible.” He strongly believes that although nothing is easily achievable, as long as one makes the effort to continue learning and improving, they can eventually accomplish anything.

Nowadays, the worry of what other people think about him is long gone. “There will always be people who disagree with you, but you can’t satisfy everyone,” he said. “So yes, just click that publish button and go for it.” In the beginning of 2022, he published a comic, “How to Filter Bad and Good Feedback”, to inspire other creators and artists to embrace their works and be comfortable with their creative expression.

In five years, Briandito hopes that The Tiny Wisdom can continue inspiring and touching the lives of many other individuals. He talked about one of his works, “To: All The Friends I’ve Lost,” his favourite piece he has created by far. “We’ve all had close friends we’ve drifted apart with, and sometimes we still think about them and wonder what they are doing. This is a topic that has been on my mind for a while, and I’m glad I drew it. I’m also surprised at the reception this piece of work has received. It’s the only piece of work that has gotten 50,000 likes on Instagram and that’s amazing.”

Since embarking on this journey, Briandito recounted when The Tiny Wisdom first reached 10,000 followers on Instagram. As of May, The Tiny Wisdom has grown to 23,000 followers. “People recognise me not because I’m a designer at Grab, but they recognise me because they saw my work and comics. It makes me happy because they don’t see me as a person who works at a company, but they see me because of what I’m doing.