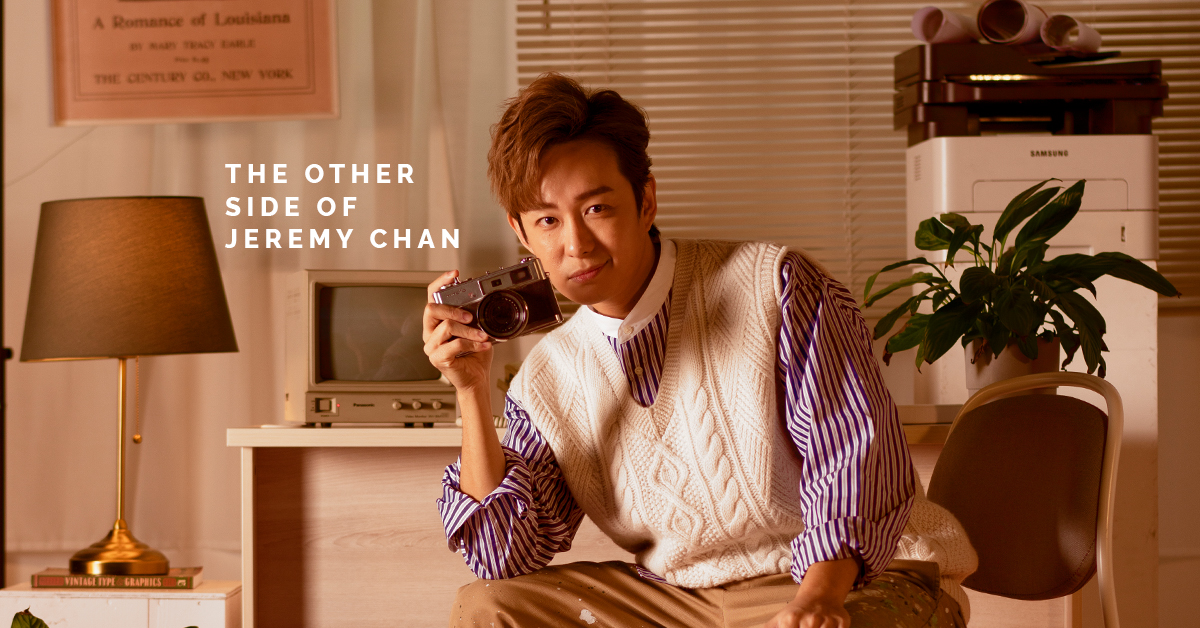 The Other Side of Jeremy Chan: The Not So Funny Thing About Being a Comedian

This pandemic would surely hit differently without the people in the entertainment industry. Imagine being constrained in your own house without anything or anyone to give you your daily dose of laughter ¢ no viral videos, no hilarious social media posts, no amusing dance challenges, no comical antics.

Needless to say, comedians are our unsung heroes. They have kept us sane in some of the most difficult times of our lives. Their quips amplified our resilience by making situations a little bit bearable.

But while these comedians bring much happiness into our lives, when life ceases to be funny, what actually brings them joy? Here, the multi-awarded Singaporean actor and comedian, Jeremy Chan, flips the other side of the coin and shares some insights about being a comedian.

While Jeremy Chan is known for his talents in acting and hosting, his passion for entertainment was deeply rooted in music. He started as a singer and then went on in the industry as a host before becoming the actor and comedian that he is now.

Singing has always been JeremyÆs passion. However, with the kind of market Singapore has, in order to become a great artist, he has to learn the importance of versatility. ōIn Singapore, being an artist means you have to be around it. You can host. You can act. So, you can grow your fanbase.ö

To excel in what he does, Jeremy needs to be very precise with how he manages his time and the roles given to him. Everything may go smoothly on screen but behind the limelight, he is also making amends with the pressures placed upon him. As a host, he needs to navigate his way in dealing with guests, artists, and co-hosts. As an actor, he is expected to always be in character.

What most people donÆt know is that even seasoned actors need a bit more time to get into their roles. It needs a lot of focus to get into character ¢ to be the actor he is playing and then jumping into hosting before coming back into reality as the Jeremy that people knew.

ōFor you not to be stressed the next day on set, you have to learn to calm down. Start the engine again. Warm-up again. Everything comes in momentum. Timing is everything. You really have to do it yourself. You are your manager.ö

Life of Fun and Laughter: The Beginning

Jeremy has always been known to be the æfunny guyÆ among his friends. Through the course of their youth, he learned how some jokes may sound funny among his peers but totally irritating to others. With this, he began to analyze the kind of comedy that people generally like. He watched a lot of comedy shows ¢ both local and international ¢ to further improve the talent that he already has.

But beyond this ability to bring joy to others, Jeremy also craves to do more serious roles. He wanted to explore more on the many other things that he can do. ōI need to work harder on my other side so I can portray very serious styles. ItÆs another side of Jeremy that I want people to know.ö

The Not So Funny Thing About Being a Comedian

Being a comedian is a double-edged sword. People expect the likes of Jeremy to always deliver jokes 24/7 ¢ like a vending machine that is always ready to spew some antics. But the thing is, heÆs also a human being. Despite his ability to bring positive things to people, he also gets tired. He needs his personal breathing space. ōWhile IÆm glad that I made their day, there are times when I need to explain to people how tired I am. So instead of jokes, maybe I can just take a picture with them.ö

As a professional actor, he learned to stand by the adage: the show must go on. Even if there are times when heÆs not feeling well, he always makes sure to properly do his job. Jeremy always takes into consideration the people heÆs working with. He believes in the importance of bringing joy to work. ThatÆs why he always wants everyone to be happy so that they can perform really well with their corresponding tasks. ōWhen youÆre doing your job, you really have to do it. It does not only affect you, but your bad mood may also affect all the crew. Hence, do a good job. Do it fast and get things done. Then you can go off and settle your personal issues or whatever.ö

Jeremy also admits to being a very sensitive and emotional person. While he is not easily angered by mean comments, he often takes time to ponder on the things that he has done that have caused people to look at him in such a way. This introspection often leads him into thinking of ways on how he can improve himself for the better.

Also unknown to many, Jeremy Chan is a great cook. When heÆs not working, heÆs usually in their house either cooking, feeding his cat, or taking care of some plants. Sometimes, he would also go hiking or visit cafes.

Jeremy continues to harness his craft by learning from the current generation ¢ particularly the way the Gen Z demographic talks and converses with their ideas. With a lot of platforms to share their views and opinion, it has also become easier for people to succumb to the pitfalls of hatred, envy, and cancel culture.

But for the likes of Jeremy who wants to bring fun and happiness to others, he just filters out this online toxicity by deleting and blocking those who spread negativity on his feed. While he admits to being sometimes affected by bashing and discrimination, as someone whoÆs been in the industry for years, he learned to manage his feelings and to be selective with his battles.

With this modern ostracism trend, Jeremy advises the younger generation: ōJust stay away from social media for a while. You cannot please everyone. Try to manage your feelings first. Do not be like them. They are like those cancer cells. They will change you to become like them. If you do so, you will become like them, a hater. Or if you fight back, as time goes by, you will become very aggressive. Your attitude towards everything will change. DonÆt do that. TheyÆre not worth it. If youÆre wrong, apologize and do better. Show them.ö

After winning the Best Comedy Performance in the Asian Academy Creative Awards, Jeremy now realizes how important it is to keep a balance between work and fun. If given a chance to talk to his younger self, Jeremy shares that he would tell himself to work harder; that he can still have fun in his job but probably work harder so in the future he can have more time for fun.

Just this month, the Singaporean actor has been nominated at the 26th Asian Television Awards for the Best Actor in a Leading Role category for the series Crouching Tiger Hidden Ghost. This prestigious award ceremony is recognized as the most celebrated event in the Asian TV industry. The esteemed awarding ceremony will stream live from December 10 ¢ 11 and will be participated by renowned personalities from Singapore, Thailand, Indonesia, Vietnam, the Philippines, and many other talented individuals across the region.

Now, with a little pressure on top of his current achievements, Jeremy hopes to continue heading forward. He is taking it one step at a time. Of course, there are those who can hit it right and get ahead of the game, but in JeremyÆs case, he prefers to embark on short-term goals because they are more realistic for him.  ōIn this industry, when you are in this line for too long, your passion will fade off. So, carry on with those short-term goals. As time passes by, you will actually achieve a lot. Rather than saying æI want to be the bestÆ, take to heart that æyou are the best’. Your best will work towards it.ö