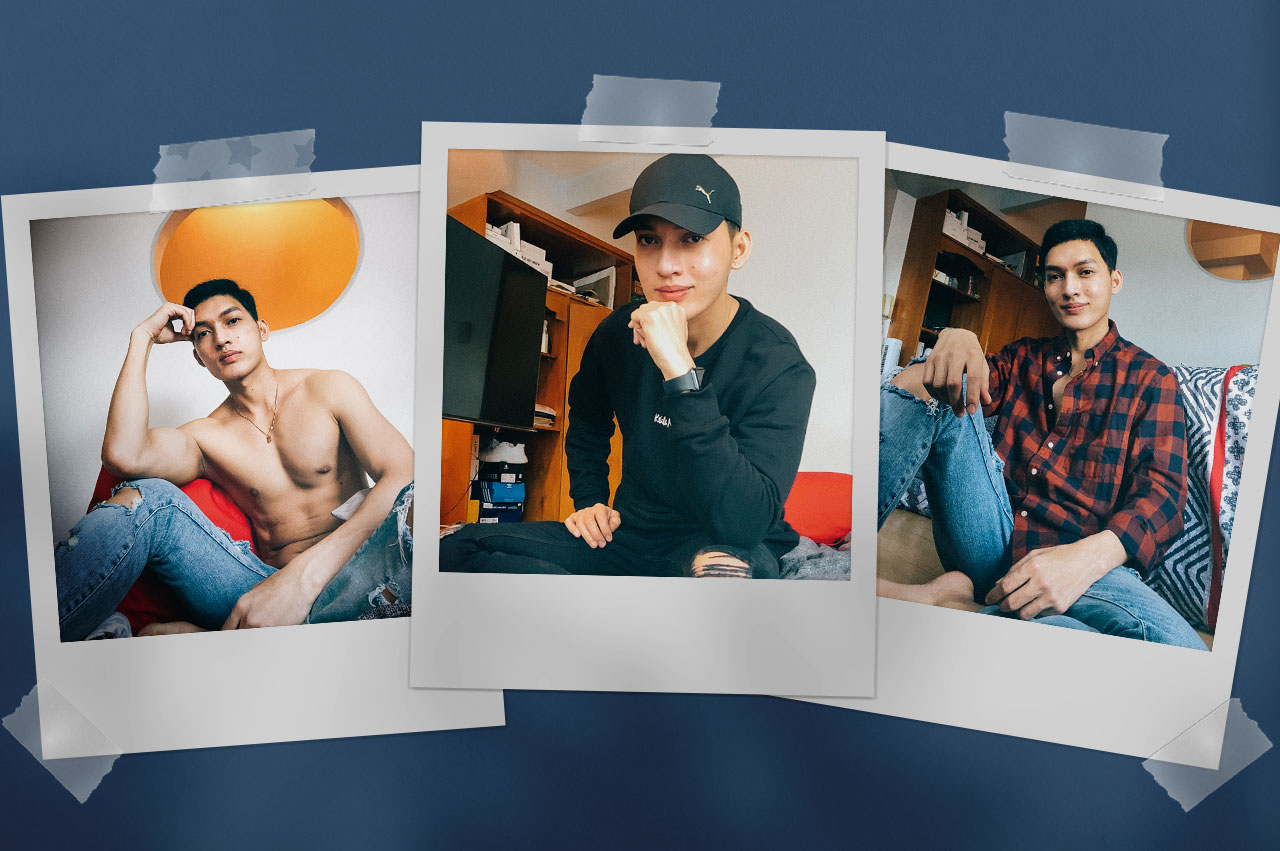 In today’s generation where social media becomes a priority more than anything else, more and more people are getting pressured to produce content regardless of age. Social media’s role is no longer supplementary in one’s life, but rather a job and a better alternative in one’s source of income. But like any other job, being an “influencer” is not a five-finger exercise. It takes a lot of commitment and perseverance to produce content that will pass the mark of what the Social Structure of Digital Networks call “virality.” To many, achieving it requires a never-ending content-creating, but to some, it’s the random mundane things that stimulate emotions or create physiological arousal that hit the mark.

We sit down with Hans Alcanzare, 27, who not only hit the virality mark once but twice, and who is now widely recognized not only in the digital space but in the traditional mainstream media as well.

A quick glance at Hans’s Instagram profile gives you a blue verified badge next to his name, a clear sign that he solidified his position as a valuable, influential person in the social network sphere. His feed offers a great aesthetic and visual balance consisting mostly of his profile and shirtless built-such content that statistically many people will surely follow. But Hans is more than what his feed says; Alcanzare is a Civil Engineering graduate and is currently working as the Urban Planner for Manila International Airport Authority. To add, he also owns a coffee shop franchise and a construction firm that he personally manages.

Having experienced two viral moments, I ask him to define what is Social Media Viral to him.

“I don’t know. I’m not really into it, though,” Hans answers quickly. “For some reason, it is really good. You can get many people who will look up to you, and you can use that to influence others to do good. You can inspire the younger generations to do something that you’ve already done successfully and encourage them to pursue what they’re passionate about. On the other hand, the downside of it is getting a lot of bashers because, at the end of the day, you cannot please everyone. You cannot expect everyone to believe your story.”

Hans being a viral magnet

Back in 2017, Hans made a viral post of him picking up his mother, who came home after 20 years of working as a domestic helper in Hong Kong, from the airport. That post landed him on several mainstream media such as Singapore’s The Straits Times and South China Morning Post, to name a few. From Facebook alone, it ranked up to 27,000 shares, 12,000 comments, and 133,000 reactions.

“I’ve been receiving a lot of offers from TV networks to have the interviews,” shares Hans when I ask him what that one viral post brought him. “I received calls from China, London, and they wanted me and my mom to travel all the way there to be interviewed. But then, I declined because I want to keep our status private. Of course, when they do the interview, they’re going to ask questions that sometimes I’m not comfortable with, so I better not; I have to protect the privacy of my family, too.”

For someone like Hans who acknowledges Social Media virality as less of a priority, he continues his life as how it should be; spending more time with his family, especially his mother, and building his future based on what he does best. But being viral on the digital space seems to follow him. In 2019, he again took social media by storm when he calls out a female influencer who asked him to draw a portrait of her in exchange for a shout out after posting a portrait sketch of Miss Universe 2018 Catriona Gray.

“I was actually very kind to her when I told her that it is not for free,” he recalls, not sounding defensive.

I ask him what triggers him to call her out on social media.

“I think she was very rude to me, and that was the time when I decided to post because I feel that a lot of people are looking down on artists. They don’t appreciate art; they always say that it is easy, and I told myself that this is not right. Everyone should respect everyone’s effort and talents. Skills are not something you can achieve overnight. It takes a lot of practice and years of experience to hone those skills. If she thinks it’s easy to do, why is she asking me to do it for her, right?”

Should she be nice back then, would you do it for her?

“Yes, definitely!” he responds instantly. “Because it’s something that I will also benefit from, she has like a million followers. If she were just nice to me when she asked for a favor, I would definitely do it. Because once she credited my name, that’s when I can also get clients.”

In Social Media, a shoutout/mention is a type of influencer marketing that many businesses nowadays are delving into. It is basically when a prominent influencer promotes another user on their social media account. In the eyes of the marketing and advertising, it’s a way to gain significant brand direct exposure and increase brand authority, but it’s rather exploitation to many creative professionals.

“It was only when my post went viral,” the 27-year-old artist shares when I ask him when was the time he started making money out of his creative pursuit. “That was the time when I realized that maybe I could turn my hobby into money.”

Hans on using his platform for the greater good

Indeed, making it viral in the digital space is nothing less but a blessing, especially in Hans’ case. Besides gaining over a hundred thousand followers on Instagram, many advertisers queue in his direct message folder, all patiently waiting to get a response. Still, Hans is not taking advantage of it.

“I receive a lot of brand deals, product sponsorships, but I don’t actually accept them. I know to myself that it is not my brand or something that I can confidently use. If it’s related to my passion, for example, a drawing or coloring material that I could use in my sketches, I will accept it, and I’ll be more than happy to promote it.”

And when I ask him which one would he choose between being an artist or an influencer, he answers, “I’ll do what I’m passionate about, and that is being an artist.”

“When you create art and share it, it’s the same as influencing people to do what they love, especially those who don’t have the courage to do it,” Hans elaborates. “Many children out there love to draw but are afraid to pursue it because of the lack of support and encouragement from the people around them.”

Hans’ goal in using his platform for the greater good continues during the recent typhoon that hit the Philippines, causing an unimaginable disaster in different regions of the country. He decided to sell most of his sketches, giving all the proceeds to those affected. On his Twitter post last 14th November, he shares that “it’s a tough decision” for him (to let go of the artworks), “but in trying times, there’s nothing more than extending a helping hand to people.” The said effort accumulated close to three thousand dollars, such a considerable amount, and help for those badly affected.

Hans Alcanzare’s viral posts’ stories clearly show that not everything we see on social media is often orchestrated and a byproduct of marketing and advertising giants. Sometimes, it’s those things that make us feel humans no matter how we slowly become menials to technologies. Not everything is filtered; the rawness and truth in every boxed photo or video in our timeline or feed remain.

When I ask him what could be his next viral moment: “Oh, well, I don’t know!”

“No one can tell. People will just share what they like or if they feel or share the same sentiments with you. For me, I will just have to focus on my business right now and focus on how to give my mom a happy life, because that’s all she deserves after all her sacrifices.”

Still canãt figure out what to wear for the holiday season? Check out the trendiest fashion drops at the newly-opened...

Beyoncûˋ leads the nomination with nine nods while her husband Jay-Z lands with five nods. They now share the record...

The Grammy Award winner extends his ãLove On Tourã concert in Asia ã with shows in Bangkok, Manila, Seoul, Tokyo,...

American Psychological Thriller ãYouã Season 4 is Coming to Netflix in Two Parts this 2023!

The brandãs latest campaign encourages consumers to love their jeans for decades, not seasons. LeviãsôÛ has recently launched the latest...

The marriage of these German icons brings in a couple of firsts ã the first-ever aluminum backpack and sneakers. For...