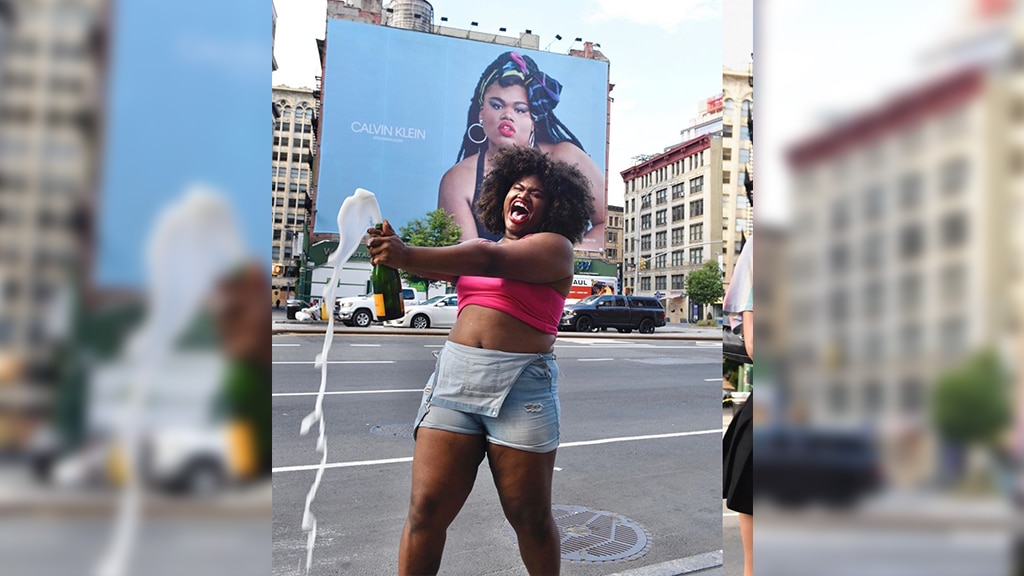 This year’s Pride celebration deserves popping a bottle of champagne – a cause for a remarkable recognition to all the LGBTQ and Black People community. Calvin Klein has made history by including their first Black transqueer model as part of this year’s Pride campaign.

Jari Jones, an actress, model, activist, and a transqueer lesbian is one of the many members who has joined the brand for this campaign. Calvin Klein’s choice of Jones is set to send a powerful message from the LGBTQ and black people community.

A video has gone viral where Jones was seen with so much happiness and excited about her massive billboard in New York City, celebrating the incredible moment with her friends.

With Jone’s recent Instagram post popping a bottle of champagne, she mentioned, “I got tired of looking for those moments. So I decided to create them. Not for me but for the next dreamer, outcast, queer, trans, disabled, fat, beautiful black, piece of starlight waiting for their moment to shine.”

The statement indeed highly speaks volumes about the importance of freedom and inclusivity, which is very timely to create a massive impact both to Pride and Black Lives Matter movement.

Elizabeth Suzann, a clothing label that featured Jones in its “Clothing is political” campaign, hailed the black transgender model, actress, and activist as a conversation leader. Jones said to Suzann that “as a black woman, a trans woman, as a queer woman, as a fat women, my entire being is gonna be some kind of political movement because I go against everything that society says is great.”

The billboard is out of the ordinary picture people see. It challenges the average expectation of society. Jone’s billboard depicts representation not just of a body with different shapes and sizes but also with gender, color, sexuality, and, most importantly, capability.

Jones wrote on her post, “There are these moments I heard about that help you heal when the society has tried to beat you down, over and over again.” She added, “I present this image, myself and all that my body stands for to my community and chosen family, in the hope that they see themselves more clearly than ever and further realize that they are worthy of celebration, of compassion love and gratitude.”

Calvin Klein hopes that the campaign ad brings courage, hope, and, most notably, love during these difficult times.