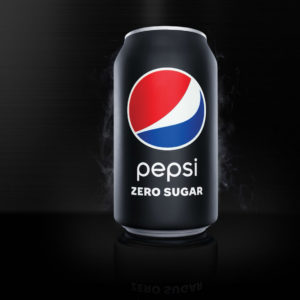 PepsiÆ Launches a new look of their Pepsi Zero Sugar

Pepsi, one of the frontrunners in the soda business, launches a new look of their Pepsi Zero Sugar. The newly-designed can showcase a matte black finish and a distinctive black tab houses the same refreshing, crisp taste of Pepsi that people love, without the sugar. The Pepsi Zero Sugar was one of the fastest-growing soda brands in the U.S. in 2019 and aimed to be more prominent in 2020. In addition to the new look, Pepsi will give everyone in America free Pepsi Zero Sugar if Super Bowl LIV ends with a zero in the score.

“At Pepsi, we are always looking for new ways to meet the evolving preferences of our consumers, and we know that people increasingly are looking for sugar-free options,” said Todd Kaplan, Vice President, Marketing, Pepsi. “We’ve learned that once people discover the great taste of Pepsi Zero Sugar, they can’t get enough of it and keep going back for more. So we are going “all in” on Pepsi Zero Sugar this year and have created a bold, unapologetic new look to match its great taste, with a new matte black can and a black tab that will stand out anywhere.”

HERE ARE A NUMBER OF WAYS PEPSI IS BETTING ON ZERO in 2020:
“America Wins Zero” at Super Bowl LIV: Every fan in the U.S. will be eligible to be reimbursed the cost of a free Pepsi Zero Sugar (up to $2.50 for purchases between 2/2 and 2/4) if either team in Super Bowl LIV finishes the game with a score that ends in zero. Of the 53 previous Super Bowl games, 25% finished with at least one team having a score end in zero, but while a record six straight years of games ended in zero between 1986 and 1991, the last two occurrences happened only in 2007 and most recently, 2016. See Pepsi.com on January 22 for more details.

Pepsi Zero Sugar on JetBlue: Starting February 1, the new Pepsi Zero Sugar matte black cans will be available on all JetBlue flights for an extra cool, refreshing experience in the air.

Pepsi Zero Sugar at Regal: Pepsi Zero Sugar will be poured at all of Regal 546 theatres with the roll out beginning this spring. Regal is one of the largest theatre circuits in the U.S. and one of Pepsi’s newest foodservice partners.

Pepsi Zero Sugar Throughout Miami: Pepsi Zero Sugar will be hosting an epic Friday night party in Miami (more details to follow), and is blanketing the Super Bowl LIV host city with the new Pepsi Zero Sugar matte black can – popping up on billboards, boats, across public transportation and more.