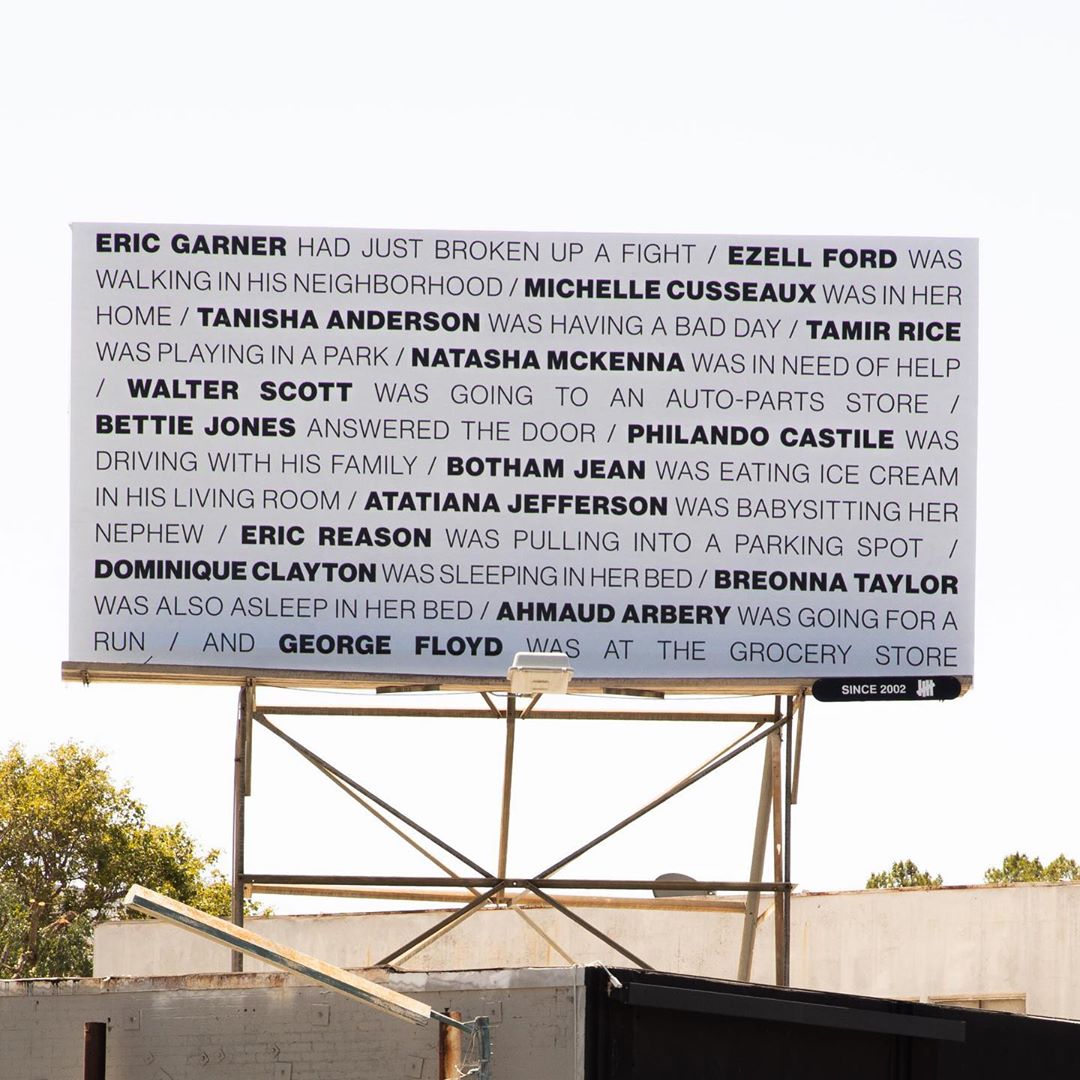 No More Names – A powerful billboard ad of Undefeated Inc.

Undefeated Inc, an original authentic sneaker store and apparel brands based in Los Angeles has made a massive move towards supporting the Black Lives Matter movement. They have changed their billboard’s face from premium clothes and sneakers into the names of black people who have died in the hands of police cruelty.

The billboard was so powerful, capturing a brief description of every black person’s cause of death. Black Lives Matter has been put back into the pedestal and has been the talk recently, not just in America but worldwide. This is in reaction to the death of George Floyd in the hands of the police. The brutal treatment which happens to have been recorded spreads quickly around the internet. Leading to anger and outrage around the globe.

Following Floyd’s death are millions of people who have aired out disappointments and anger over almost all forms of social media. They have taken to the streets in protest. Using his dying words “I can’t breathe,” it already engraved in the consciousness of the struggle for justice.

How did The Black Lives Matter start?

Even before the George Floyd incident, the Black Lives Matter campaign has been established. The phrase “Black Lives Matter” emerged first in 2013, after George Zimmerman was discharged for the killing of Trayvon Martin. Followed by this incident was the reported police brutality in Ferguson, Missouri, when Michael Brown, 18 yr old boy, was shot to death by police in 2014. This occurrence has brought so much outrage. It resulted to a lot of people go to the streets and did a massive protest.

After the acquittal of Martin, three radical black organizers ó Alicia Garza, Patrisse Cullors, and Opal Tometi ó created a Black-cantered political will and movement building project called #BlackLivesMatter. This campaign or movement aims to amplify anti-black racism. It also brings forward the conversation to the leaders about the violence that black people have experienced over the years.

From then, a different form of protest was established. People were motivated to rouse their communities to end state-sanctioned violence against Black people. The spark began in St Louis and Ferguson, who went on the streets and put themselves on the line day as they continue to show up for Black lives and fight for their rights to live normal, removing violence and police brutality.

How far has #BLACKLIVESMATTER gone?

Over the past few weeks after George Floyd’s death, people are tweeting about Black Lives Matter now more than at any point in the movement’s history. It has become remarkable with the significant factor of prominent and most influential personalities, artists, politicians, actors & actresses, sports icons, etc., that were seen to be initiating and participating in the movement.

With the recent report from CNN, digital support for Black Lives Matter is at an all-time high. Millions of people are using the hashtag daily. Recent polling suggests Americans’ views of police and the current protests against police brutality are changing offline. The use of the Black Lives Matter hashtag peaked three days after George Floyd died in police custody. A Pew Research Center analysis published this week shows. #BlackLivesMatter was tweeted 8.8 million times that day, according to Pew. For the following two weeks, users tweeted #BlackLivesMatter an average of nearly 3.7 million times per day.

Where the action and conversation around the globe have landed, there is a clear result of just how mainstream Black Lives Matter has become.