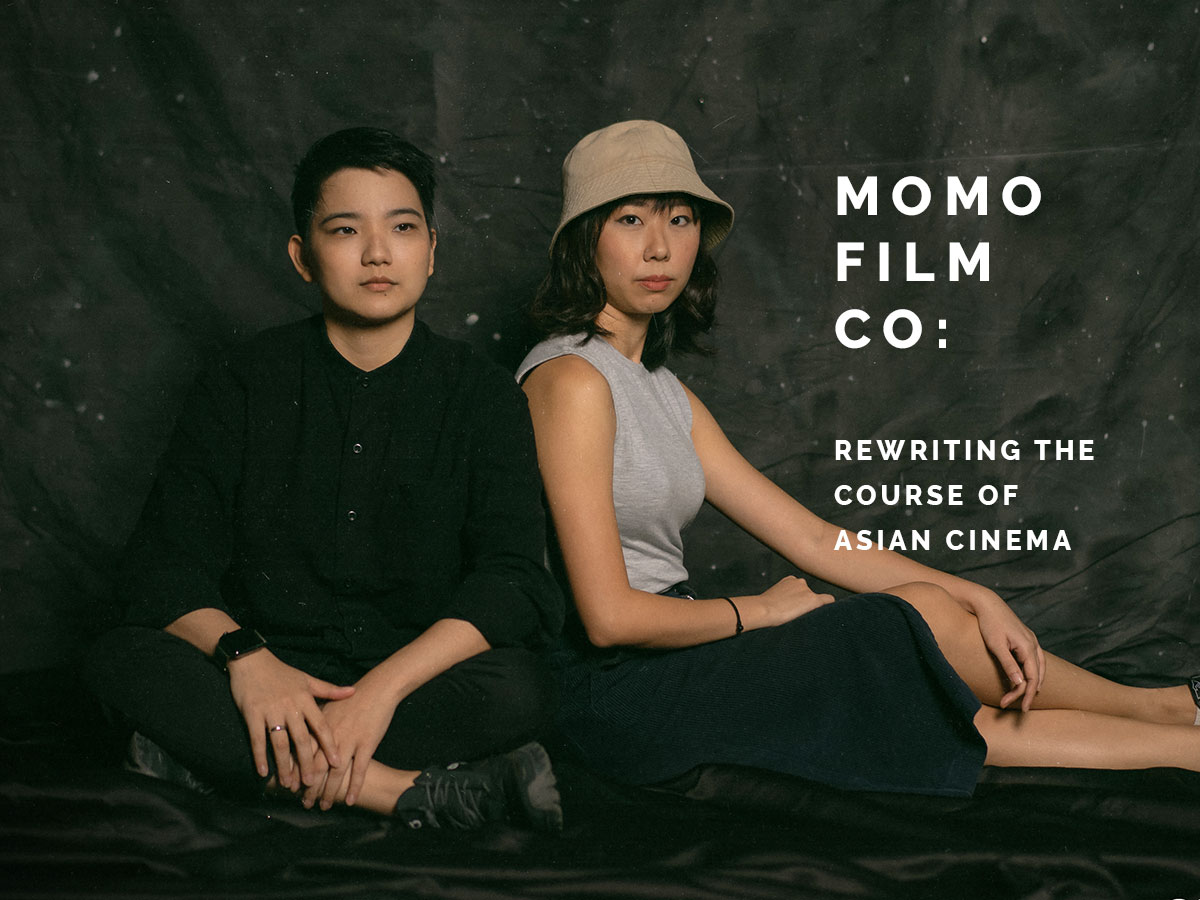 Storytelling has significantly changed throughout the years. With social media and digital platforms made easily accessible to creatives nowadays ľ providing a wide range of perspectives ľ it is easy to think that all voices are now heard and everyone is equally represented.

But if you look closely at mainstream movies shown and highly popularize at present, much of what we actually see on theaters and subscription streaming sites are mostly created with profit in mind. Quality content and creating a lasting impact usually take a backseat in favor of producing something appealing and entertaining to the audience.

However, creatives are not one to be tamed. They trailblaze where there seems to be no path and light up the way so others may have the courage to finally come out of the boxes forced into them. In hopes of amplifying Asian stories that definitely deserve to be heard, film producer Si En Tan and writer-director Kris Ong founded the Singapore-based film and TV company, Momo Film Co.

The Birth of Momo Film Co

Sharing the same taste in films and vision for the film industry, Si En and Kris ľ who started as classmates 12 years ago at Singaporeĺs Ngee Ann Polytechnic ľ began working together and launched their own production company, Momo Film Co, in 2018. By creating premium quality content and fresh perspectives on Asian stories for viewers in the region and around the world, the company has secured collaborations from various media partners to create a large slate of films and series. With this, they were able to provide a space for emerging filmmakers to nurture their giftedness and creative ideas ľ to free their voices and grow in the field.

Being at the forefront of providing unique and culturally diverse content also comes with a lot of challenges. With the very stiff competition in the film industry in Asia and being part of the minority, Si En and Kris shared that they remain focused on their vision: on recreating moments to last a lifetime and putting into realization the things that they strongly believed in.

Compared to countries in Europe, film literacy is also not that strong among many Singaporeans. As a Singapore-based company, Momo Films Co. finds it important to establish connections with the local audiences to grow as Southeast Asian filmmakers and Asian creators. Thatĺs why they always strive to continue growing as a company and create bold content that can reach the hearts of the audience.

ôCreating something new is always hard because you always have to find your way around.ö Both of them are grateful that there are people who have been truly supportive of their goals. There are those who have participated in their first fundraising, those who have shared their time and money, and those who were generous enough to allow them to access resources for them to better convey the idea of the content that they are making. And thereĺs the Singapore government, who has established the Film Commission, which provides support and grants to those pursuing studies in filmmaking ľ from short films to feature films.

The Future of Momo Films Co.

With demands for high-quality Asian content continuously surging, Momo Films Co. intends to expand its niche by closely working with filmmakers in their realm ľ allowing them to work on new voices and initiatives to really bring the message that they intend to convey to the audience. The Singaporean company also assists filmmakers in the distribution of their craft, be it in local theaters, online platforms, or international festivals. One of the pillars of the company is to walk their filmmakers into their first feature by strategically circulating the films to film festivals to create waves internationally before introducing them to the domestic market. This creates awareness among the audience, particularly in the local scene, and stirs their curiosity into watching the films created.

Momo Films Co. is now expanding into TV scripts in hopes to reach a more diverse and wider audience. A few months ago, they have partnered with the award-winning and one of the biggest independent companies in Asia, Beach House Pictures ľ allowing them to scale up their scripted space and become more known internationally.

Like the American independent entertainment company, A24, both founders hope to see Momo Films Co. grow into becoming one of the major players in the industry that is known for its distinct taste and quality ľ edgy, beyond the mainstream, and skewed towards a more diverse audience whose interests and voices are not justifiably represented on screen.

Creating a company with a strong sense of the kind of stories that they want to tell, creators Kris and Si En emphasized how their filmmakers and the stories they want to tell should always come first: these are values that want to live upon despite the many tradeoffs that they may have to deal with along the way. ôI think in terms of growth [of the industry], itĺs not just about making our films, you know, successful. It has to be there. The whole industry is growing at the same time. So, I think thatĺs something thatĺs very important to us. Itĺs not just like personal wins. It has to be contributing to a larger community of people.ö

Believing that every filmmaker has something to bring to the table, founders Kris and Si En shared how unique every filmmaker is. The competition in the film industry may be tough, but they believe that different people have different personal stories to share through their films. ôI guess, it will always be different. As long as we are true to the type of stories we want to tell, it will always be different from each other. And I think thatĺs good. Thatĺs true.ö

As the company moves forward towards making impactful content, Si En ľ who sees herself drinking a lot, hanging out with friends, and supporting them if you take out filmmaking in the picture ľ dreams of creating a culturally iconic film that people can truly relate to no matter where and what age they are in. ôI like the idea of ĹFriendsĺ. Not necessarily in its format [that it is a sitcom] but like the amount of impact that ĹFriendsĺ had as a series. It is quite impressive that even today, the younger people [can] still relate to it. I was watching ĹThe Reunionĺ and I saw testimonials from people who found some sort of hope, some sort of life, sort of companionship in times when theyĺre depressed or going through some political turmoil. Thatĺs like my dream.ö

Kris ľ who admits to becoming a dancer, gardener, friend, and sister had she not pursued filmmaking ľ on the other hand, dreams of creating not just a film but something that works over a long span of time, something that can create a special relationship with the audience, something that touches the lives of people. ôItĺs not just entertainment that you turn on because youĺre tired. You donĺt what that thing. [I want that] if itĺs done, itĺs really something that, you have known, you feel sad when the show is over, you miss the characters. I think, for me, thatĺs what I always would like for all of us. For everything that we create.ö

While both of them have been recognized and received numerous awards for the premium quality of films they have written and produced, they humbly admitted that thereĺs more to what they do than such kind of acknowledgment. ôI think itĺs good. Itĺs great to be recognized but I think I appreciate them because they help me continue making films all over again. So, I appreciate that but I donĺt think they mean as much as personal growth. I just like to be in some growth that feels better than like winning an award.ö Just like many companies, the success of Momo Films Co. was not built overnight. To those wanting to pursue similar paths, founders Kris and Si En shared that while itĺs vital to learn what to do and how to convey the stories that you want to tell, it is also equally important to allow yourself to be open and explore a lot of things that you want to do. Things will fall naturally into place when you look inside yourself and finally find the strength and courage to embrace who you are. ôJust keep trying. The journey is always going to be really difficult, like extremely difficult. But just keep going. If itĺs something that you really want to do, just be honest and sincere.ö

Swap your tropical summer wear for comfy coats, hats, and gloves for one month as SingaporeÔÇÖs Bayfront Event Space turns...

Still canÔÇÖt figure out what to wear for the holiday season? Check out the trendiest fashion drops at the newly-opened...

Beyonc├ę leads the nomination with nine nods while her husband Jay-Z lands with five nods. They now share the record...

The Grammy Award winner extends his ÔÇťLove On TourÔÇŁ concert in Asia ÔÇô with shows in Bangkok, Manila, Seoul, Tokyo,...

American Psychological Thriller ÔÇśYouÔÇÖ Season 4 is Coming to Netflix in Two Parts this 2023!

The brandÔÇÖs latest campaign encourages consumers to love their jeans for decades, not seasons. LeviÔÇÖs┬« has recently launched the latest...