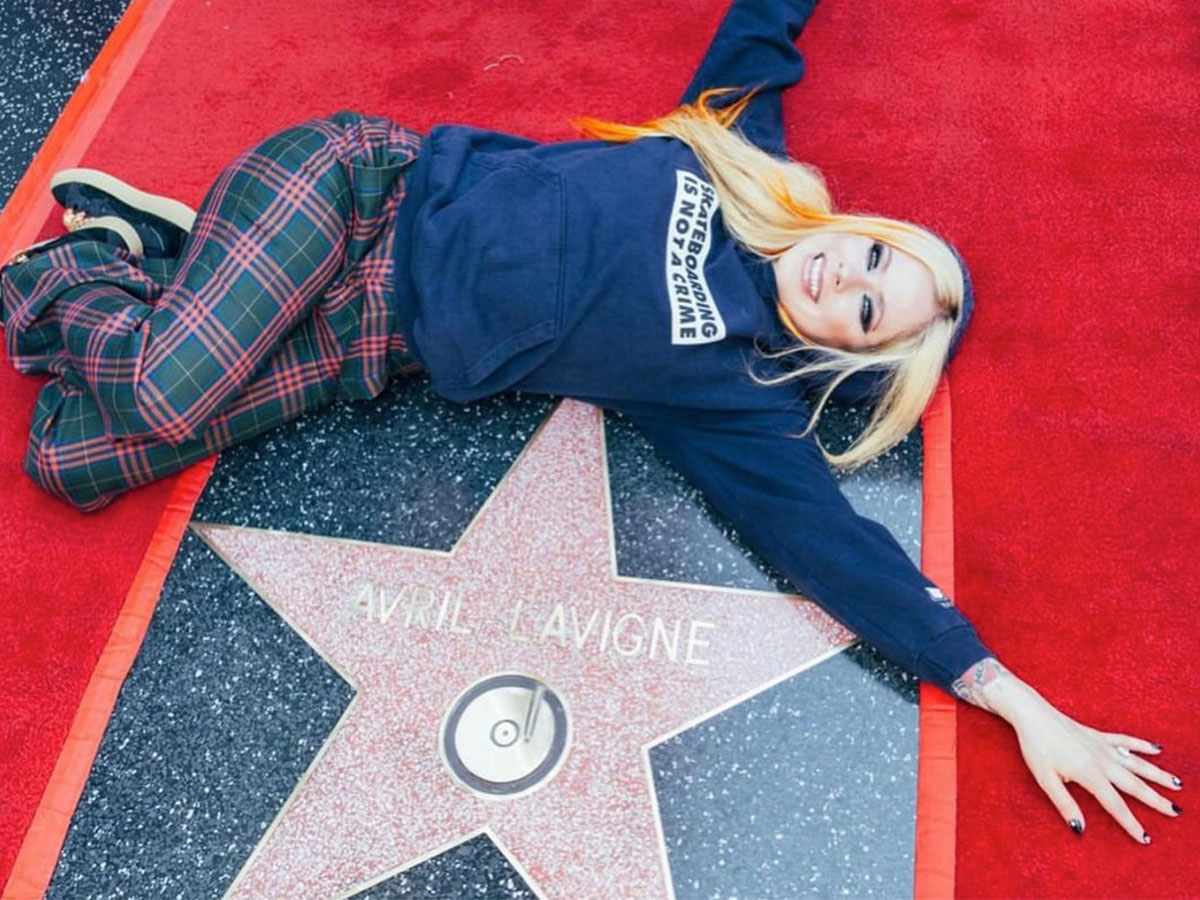 “Look Mom. I got a star on the Hollywood Walk of Fame.”

Hollywood Walk of Fame honors the eight-time Grammy-nominated singer-songwriter, Avril Lavigne, on the 20th anniversary of “Let Go”. Through her social media page, the pop-punk princess treated her fans to moments from when her Hollywood star was unveiled to the public.

Fellow celebrities, like the singer and lead guitarist of Goldfinger, John Feldmann, and  American rapper and actor Machine Gun Kelly—who was one of the collaborators on her seventh and latest studio album, Love Sux, released in February of this year—were present during the said event. He will be Avril Lavigne’s co-headliner on the US leg of her 47-stop “Love Sux” tour, coming this September 23 at the Firefly Music Festival in Dover, Delaware, followed by Las Vegas on September 24 and October 22.

The Sk8er Boi singer felt truly ecstatic upon seeing her name finally embedded in one of the stars on the historic landmark on the sidewalks along Hollywood Boulevard. She received the honors while wearing a statement hoodie: “Skateboarding is not a crime” – the same hoodie she wore when she first visited Hollywood approximately 21 years ago. Avril Lavigne’s star is the 2,731st since the completion of the Walk of Fame beginning in 1961.

With a tender nostalgic moment, Avril Lavigne recalled her first star encounter – which was apparently a photo next to what appears to be Tom Cruise’s star. “So, I am 16 years old and I’m on my first trip to Hollywood. Of course, I had to visit the Hollywood Walk of Fame because it’s iconic.”

Beaming with such happiness, Avril Lavigne penned on her Instagram Stories: “Thank you guys so much. Thank you to my amazing gift of fan base, to my supportive family still to this day, and to my amazing collaborators. I’m so grateful and it’s so f*cking cool.”

At the age of two, Avril Lavigne’s parents already spotted her vocal abilities when she sang Jesus Loves Me on their way home from church. When her family moved to Napanee, Ontario, she began performing in productions of You’re A Good Man, Charlie Brown, and Godspell at the Lennox Community Theater.

By sixteen, Lavigne had already landed a deal with Arista Records. With this, she decided to drop out of high school and move to Los Angeles to focus on her recording career. Despite her current success, she admitted during her appearance at the Grammy Museum in 2019 that the LA music industry didn’t quite get her at first. Not knowing that she would later become a punk princess, she described LA’s music as being too soft and fluffy for her. “I just wanted to hear guitars, even though I was only 16. The label saw me as a pop star.”

In 2002, her album Let Go became the biggest pop debut of the year — with more than 16 million copies sold worldwide. It was certified seven times platinum in the United States. The album was such a hit that she became the youngest female solo artist to have a No.1 album in the UK.

Avril Lavigne was only seventeen when the album was released and got nominated for a Grammy in the Best Pop Vocal Album category. Aside from that, two of its songs also got nominated, Complicated as the Song of the Year and Best Female Pop Vocal Performance and Sk8er Boi for Best Female Rock Vocal Performance. She was also nominated for Best New Artist—which she lost to Norah Jones.

A year after, Avril Lavigne received three more nominations at the 2003 Grammys for Best Song of the Year, Best Female Vocal Performance for her song I’m With You and Best Female Rock Vocal Performance for Losing Grip. Her success continued in the years that came after the release of her second album, Under My Skin, in 2004, The Best Damn Thing in 2007, Goodbye Lullaby in 2011, and Avril Lavigne in 2013.

Complementing all her accomplishments, she and her fiancé, Mod Sun, who was also present at the unveiling of her star on the Hollywood Walk of Fame, announced their engagement last April.