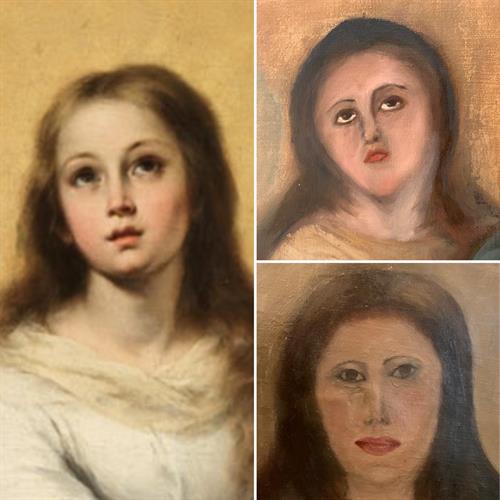 Is that Virgin Mary? The latest botched art restoration in Spain

Criticisms circulated when the result of restoring the original painting did not go as planned. Experts deemed for the artwork to have suffered a damaging and disfiguring repair. People in Spanish art conservation community filled with outrage and disappointments when they’ve seen the face of Virgin Mary who was left unidentifiable.

Because of this recent incident, conservation experts in Spain have called for a tightening of the laws concerning restoration work. According to The Guardian, a private art collector in Valencia was reportedly charged Ć1,200 by a furniture restorer to have the picture of the Immaculate Conception cleaned.

Despite efforts that involve two attempts to restore the artwork, the outcome was nowhere near or close to its original state.

“I don’t think this guy ¢ or these people ¢ should be referred to as restorers,” Fernando Carrera, former president of Spain’s Professional Association of Restorers and Conservators, told the Guardian. “Let’s be honest: They’re bodgers who botch things up. They destroy things.”

There’s a similar instance that happened eight years ago with the infamous “Monkey Christ.” A devout parishioner’s attempt to restore a painting of the scourged Christ on the wall of a church on the outskirts of the north-eastern Spanish town of Borja. The unacceptable result of the restoration has made it to the national news.

The Guardian reported about the former president of Spain’s Professional Association of Restorers and Conservators (Acre) dismay with regards to the current restoration practice. Carrera said that the law is currently allowing people to engage in restoration projects even if they lacked the necessary skills.

“Can you imagine just anyone being allowed to operate on other people? Or someone being allowed to sell medicine without a pharmacist’s license? Or someone who’s not an architect being allowed to put up a building? While restorers were “far less important than doctors,” he added, the sector sill needed to be strictly regulated for the sake of Spain’s cultural history. “We see this kind of thing time and time again, and yet it keeps on happening.

Carrera further explained, “Paradoxically, it shows just how important professional restorers are. We need to invest in our heritage, but even before we talk about money, we need to make sure that the people who undertake this kind of work have been trained in it.”

Maria Borja, one of ACRE’s vice presidents, told Europa Press ¢ which broke the news of the Murillo repair ¢ that this kind of incident is “unfortunately far more common than you might think.” She added, “We only find out about them when people report them to the press or on social media, but there are numerous situations when works are undertaken by people who aren’t trained.”

Carrera urges the government or politicians to give an equitable interest and importance on this item. To preserve cultural and historical heritages and allotting financial resources to safeguard Spain’s past treasures. “We need to focus society’s attention on this so that it chooses representatives who put heritage on the agenda,” he said, according to The Guardian.

He also added, “It doesn’t have to be at the very top because it’s obviously not like healthcare or employment ¢ there are many more important things. But this is our history.”

The continuing incidents of failed repairs like these have led experts to reiterate the importance of increased regulations covering art restoration to preserve Spain’s rich history and culture further.