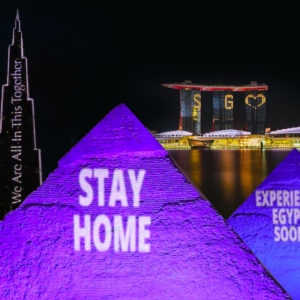 Iconic Monuments around the world light up with messages of Solidarity

While the global pandemic, COVID-19, currently shakes the world, each country is busy figuring out how to put an end to it. As we all know, the world’s survival doesn’t only depend now on the medical professionals and the Government, but mostly to our efforts and being socially responsible.

While we fight this battle, many sectors may be private, or public has been making creative efforts to encourage everyone to be mindful and stay home as it seems that it’s the only way now to break the cycle and cease the virus. Late last month, Burj Khalifa, the tallest building in the world, lit up with the message- ‘Stay Home’ both in native and English language. A few days after, they illuminated the building once again, showing a message of ‘We are all in this together’ in various languages. It doesn’t stop there until today, they been using the said iconic building in giving messages in support of the worldwide fight.

From one iconic building to another, Marina Bay Sands in Singapore started lighting up their building displaying “SG ??” with the country’s flag ‘projected on the building’s “float.” The message may be simple, but it conveys a message of love to the nation. Marina Bay Sands has suspended the operation of both the hotels and the shopping mall that started last 7th April until Monday, 4th May, following the Government’s implementation of the Circuit Breaker period.

Speaking about Iconic, the oldest of the Seven Wonders of the Ancient World, the Great Pyramid of Giza has its evenly iconic share. Just this weekend, Egypt’s Ministry of Tourism and Antiquities has lit it up the historical monument with a message of Solidarity and recognition for health care workers during this pandemic.

Khaled Al-Anani, minister of Tourism and Antiquities, encourages the Egyptian people and all the peoples of the world to stay in their homes and protect themselves and their parents. Adding to the speech is a greeting and thank you to those who defend the nation in fighting the disease such as the doctors, nurses, and hospital workers.

As of this writing, Egypt ranks at number two in the most amount of confirmed COVID-19 case in the continent of Africa.