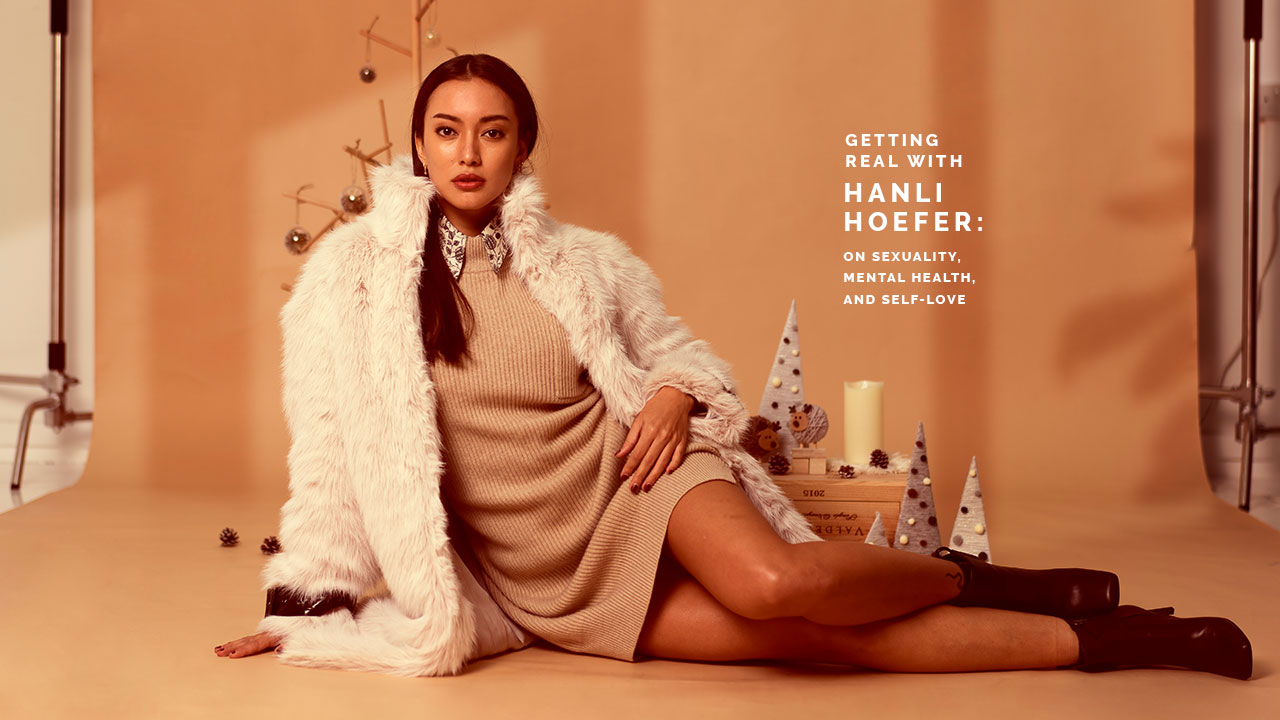 Getting Real with Hanli Hoefer: On Sexuality, Mental Health, and Self-love

Despite technological advancements, we, unfortunately, live in an age where we find validation from people we barely know of. Social media has gained so much access in our lives that many have made it a goal to make themselves acceptable ¢ even if it means denying themselves the ability to embrace who they truly are.

These days, itÆs becoming more difficult to openly discuss topics like sexuality, mental health, and other sensitive issues that go beyond the norms of society. One wrong move and your online identity can immediately turn upside-down. People will then come attacking you at a personal level ¢ despite the lack of understanding of where you are coming from and the points that you are trying to convey.

But Hanli Hoefer refuses to succumb to these willful demands of society. This modern Asian woman proves that thereÆs much more to her than how people see her as.

Growing up, the multi-talented model, MTV Asia VJ, and influencer, Hanli Hoefer never did feel authentic towards following the conventional route. As a creative, the thought of working on a nine-to-five job did not spark anything from her. Instead, she felt a sort of pressure in following such kind of timeline: getting all accomplished from a university and working at an office desk until retirement.

For this reason, she took a gap year after she finished school and allowed herself to experience what life has stored for her. There began her modeling career which eventually led her to become an MTV Asia VJ. Hanli fondly recalls how she was weirdly asked by someone during a photoshoot if she liked the idea of talking to herself. ōAnd I was like, honestly, thatÆs all I do. All day long. I always just talked to myself. So, obviously, I said æyes.Æ And I guess, the rest is history. I got the role. I was really young when I started. I just turned 21.ö

Becoming MTV AsiaÆs main host opened numerous opportunities to Hanli. Juggling along with her modeling career were different avenues that got introduced to her. She then started doing a little acting and radio hosting.

Being open to all experiences and the many possibilities in life sustained Hanli to keep going. She aspired to try everything at least once ¢ allowing herself to learn and become the person she is at present.

Delving Deep into Herself

While many would immediately jump into the opportunity of going back in time and making better decisions, Hanli finds comfort with who she is right now. Instead of changing her past, she shares that what she wished to have done was to start earlier her relationship with herself.

ōThe last three years for a lot of us have been really eye-opening in terms of our inner peace, our mental health, our emotional health. One of the main lessons for me, through all this, even before the pandemic, was just waking up to the sense of relationship I had with myself. So, I think one thing I wish I had worked on earlier was creating a stronger sense of self-compassion and mindset ¢ cementing that and becoming my own best friend.ö

As an established name in the industry, many people would assume that Hanli is all extroverted. But there is definitely a very low-key grounded, introverted side of her that only a few know. Even before the pandemic happened, she recalls opting to stay at home rather than going out. Even more so these days, she has become more of a homebody.

Aside from that, HanliÆs creativity is not only limited to hosting and modeling. Growing up in a very artistic household, it came naturally for her to learn how to draw, paint, and even design. In fact, she even considered going to an Art School.

Getting Real in This Time of Edits and Filters

For someone who has caught the final wave of the traditional chapter of the industry, Hanli finds it interesting how things have gradually unfolded. She recalls how people like her were hired based on their portfolio, on their pure ability to model, act, or showcase their talents.

With more opportunities made open to the younger generation, Hanli sees it as a perfect venue to finally get everyone represented ¢ something that she wished she grew up having more of. However, like many, even with her decade-long experience in the industry, there are still days when she finds herself falling into the comparison trap. When this happens, she reminds herself: ōDo not base your value on numbers. This is very easy to succumb to. Work on who you are inside and outside of whateverÆs happening online. Focus on that.ö

Hanli emphasized that living in this time of social media requires a certain level of vulnerability, which can also be an enormous strength. ōAll of us, to a certain degree, care of what people think. We just want to feel accepted. So, to put yourself out online, with that human fear that people are going to judge but still doing it anyway, is just so brave. So, I really respect anyone on any platform at any level who dares to do that because itÆs not for everyone. So, keep doing it. Keep putting yourself out there. Keep being brave because if you donÆt showcase your true self, how are you going to attract your true vibe? Attract your real people. YouÆve got to do it regardless.ö

She also believes that people must first find joy in what they do. By doing so, she found people who share the same thoughts and sentiments as her. ōI get to connect with someone that I would have never found otherwise. And that makes it worthwhile.ö

At present, Hanli co-hosts æJust So WeÆre ClearÆ podcast with Marissa Trew ¢ where they share pieces of opinion on matters that are not typically discussed in Asian society. Being raised by a generation that prohibits people from discussing unconventional ideas, Hanli wants to become an example of what she wished she had: an environment where people can freely talk about everything.

Specifically, Hanli wants to change the way people think about concepts that were considered taboo by many generations. She extremely feels untoward hatred with the word ætabooÆ because of the weird energy it gives off to anything associated with it ¢ say for example sexual health, womanhood, mental health, and all other topics implicitly prohibited of discussion based on cultural sensitivity.

Being on social media for the last ten years, Hanli has also gone through the waves of curated feeds, of Photoshopped photos. As a model, she firsthand experienced being fixed up and edited on Photoshop to the point of barely recognizing herself. And this challenged her to reflect more on how she wanted to project herself: to be more authentic, be real, and more accepting of who she is.

Setting Goals and Working Towards Them

Hanli has obviously soared high from where she once took off. She has established a multifaceted career, and she manifests to hopefully get other roles like acting or running a radio show as her career continues to bring her to places. There are definite goals that she would want to achieve ¢ such as her ultimate goal of having her own talk show like Kelly Clarkson and Oprah Winfrey when they had enough experiences in life. Nevertheless, she also reminds herself to take things one goal at a time and not to be too hard on herself should things donÆt go accordingly to how she would want them to happen.

Hanli greatly takes inspiration from her future self. Like a Pinterest board, she loves journaling and envisioning herself: ten years from now, who do I want to be? She particularly gets passionate about the details like: What does my hair look like? What kind of jewelry am I wearing? Where am I seated? What tattoos do I have? WhatÆs the color of my nail polish? By doing so, Hanli gets a clearer vision of her future self ¢ falling deeply in love with her and getting more motivated to work on her goals.

With all these experiences at hand, Hanli encourages the current generation, Generation Z, to: ōDo whatever youÆre going to do. Do it anyway. ThatÆs the only way youÆll discover who you are. Make mistakes. Apologize. Learn. DonÆt just feel like you have to do or be anything other than who you are right now. ThatÆs enough.ö