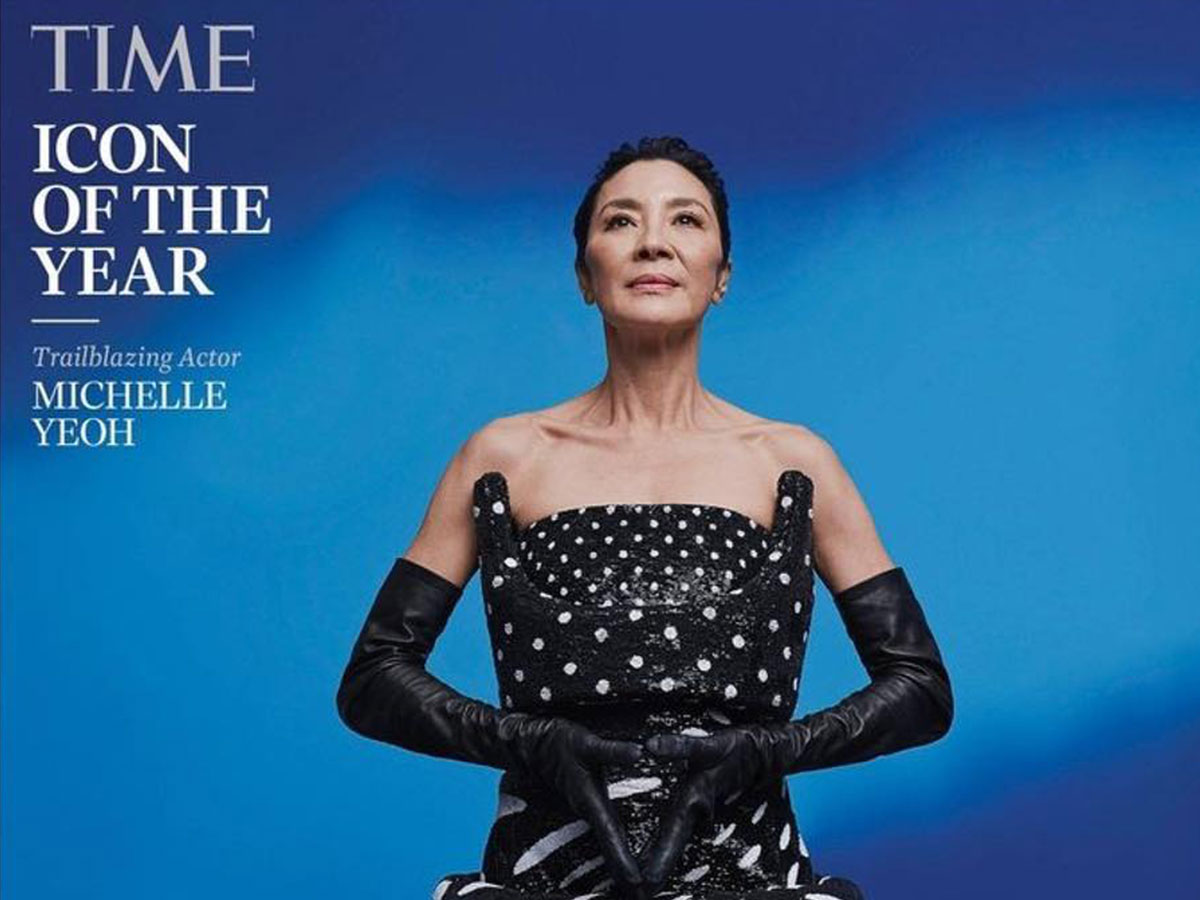 Get to Know TIME Magazine’s Icon of the Year, Michelle Yeoh

Listed as one of the Most Influential People of 2022, the Malaysian actress cements her stature in the world of entertainment as TIME Magazine names her its 2022 Icon of the Year.

As if the groundbreaking success of Crazy Rich Asians was not enough, Michelle Yeoh further blew everyone’s mind in her spectacular performance as Evelyn Wang in the smash hit surrealistic action-drama film, Everything Everywhere All at Once, which has earned numerous recognitions from critics and award-winning body. As a favorite Oscar nominee to win in the Best Actress category, Yeoh shared how she has been thinking about it. “And not just me—I feel like my full Asian community has thought about it. They come up to me and they say, ‘You’re doing it for us.’”

TIME noted that as of now, everyone in Los Angeles wants to meet the legendary actress. But who was Michelle Yeoh before she became the 2022 Icon of the Year? Did you know that despite her impressive career status, she has never been No. 1 on a Hollywood call sheet? Well, not until Everything Everywhere All at Once happened.

Here Are Some Fun Facts You Have to Know About TIME’s Icon of the Year, Michelle Yeoh

Despite the success of Everything Everywhere All at Once, did you know that Michelle Yeoh nearly walked away from her role? Yes, you’ve read it right. Continue reading to learn more about the life of Michelle Yeoh and how she championed women empowerment and earned her title as “Icon of the Year.”

In an interview, Yeoh revealed that the character’s original name was Michelle Wang—to which she completely disagreed, even if the Daniels (Daniel Kwan and Daniel Scheinert) believed otherwise. “The character cannot be named Michelle Wang. I’m not an Asian immigrant mother who’s running a laundromat. She needs her own voice. If you don’t change the name, I’m not coming in.”

There and then, they’ve come to an agreement to change the character’s name to Evelyn Wang—someone who’s now marching her way toward the Academy Awards after earning the best review of her character.

Even at 60, Michelle proves to be of timeless beauty. During her younger days, before she became one of Asia’s greatest stars, she was crowned Miss Malaysia in 1983. Not only that, she also traveled to Australia to compete and bagged Miss Moomba and the Queen of the Pacific title.

Unlike many who have set their eyes to be in the industry, Michelle’s illustrious career was only a chance-upon moment. While filming for Jackie Chan’s commercial, the co-founder of D&B Films, was looking for an actress to appear with the phenomenal martial artists. It happened that a friend of Poon, whom he dined with, suggested that the newly crowned Miss Malaysia be Chan’s partner. Without much ado, Michelle flew to Hong Kong, made a contract with D&B Films, and the rest, as they say, is history.

Seeing her take the reins of Crouching Tiger, Hidden Dragon, MCU’s Shang-Chi and the Legend of the Ten Rings, alongside her upcoming drama in The Witcher: Blood Origin, it’s easy to think that Michelle Yeoh had formal training in martial arts. But looks can truly be deceiving—and this probably proves the actress’s ability to do superbly in the roles given to her.

Despite the lack of training in martial arts, Michelle Yeoh excelled in sports (swimming and rugby) in school. Her grace was innate, as she had been having ballet lessons since she was four—and even aspired to pursue such dreams after moving to London and enrolling in the prestigious Royal Academy of Dance.

Because of the nature of the roles given to her, she had to learn the moves on the set and spent hours training herself in the gym, together with veteran actors like Dick Wei.

Wait, she was a Bond girl? Yes. Michelle Yeoh’s established profile in Asia earned her the role of Wai Lin in the 1997 James Bond installment, Tomorrow Never Dies. Being the cast opposite of Pierce Brosnan marked her Hollywood debut and opened a lot of opportunities for her, which later on helped in cementing her name in the industry.

Aside from leading The Witcher: Blood Origin, Michelle Yeoh’s future projects include Kenneth Branagh’s A Haunting in Venice and the next installments of Avatar: The Way of Water. Michelle Yeoh’s steady level of success only proves that there’s so much more that Asians can do. As the celebrated actress puts it: “It shouldn’t be about my race, but it has been a battle. At least let me try.”