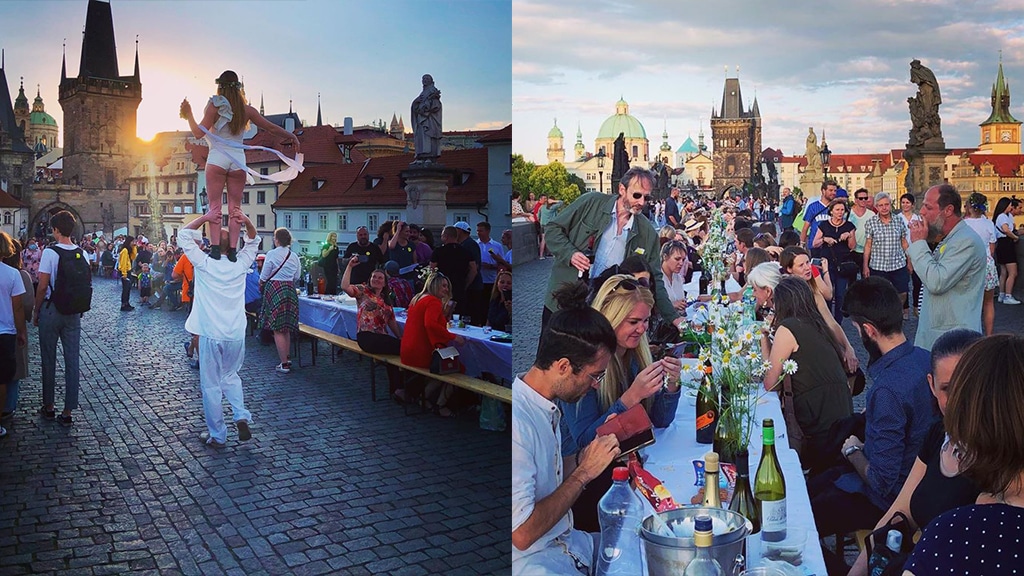 Czechs hold a street party to bid farewell to the pandemic.

A street party was held in Prague, capital of the Czech Republic on Tuesday despite WORLD HEALTH ORGANIZATION’s warning that the virus is far from being over. Thousands of residents attended to give the coronavirus a symbolic farewell despite increasing Covid-19 cases across the world. The city’s Charles Bridge hosted the gathering where locals were allowed to bring picnics.

People were invited to dine on a 500-meter long table set where around 2,000 seats were set up. They were encouraged to bring their own drinks and food to take part in the organized event to bid their goodbyes to the coronavirus pandemic.

No social distancing was observed, and most people not wearing masks while singing and dancing as they celebrate. The event made it to all social media corners and started gaining different feedback and opinions across the world.

“The table is set” was the name of Tuesday’s event organized by the citizen group “Piana na ulici” (Pianos in the streets) and the capital’s city council. The organizers said on the event’s Facebook page, “We are experiencing a unique situation where Charles Bridge is not crowded with people. Maybe we won’t experience it ever again. Together with you, we want to symbolically celebrate the farewell to the past difficult period of the coronavirus crisis.”

“Anyone can come, they just have to bring something. Maybe bake a cake, prepare canapes, bring a rose in a vase. Or just buy grapes in the evening. It is an act of trust that everyone will bring something,” it added.

Data shows that there were about 12,000 infections in the Czech Republic (out of 10 million population), and 350 people reported the death.

The event’s organizer said the celebration was possible due to a lack of tourists in the famously charming city, BBC reports. The number of diners was limited, and they all had to register in advance.

“We need to send the world a symbol that we live again and that we invite decent tourists, both Prague residents and non-Prague, to experience this unique event”, said Prague 1 Mayor Petr Hejma to the media.

The Czech Republic has been heralded as one of Europe’s virus-fighting success stories. Aside from that, they have managed to impose lockdowns way earlier than the other countries. They have also implemented one of the continent’s harshest lockdowns. The said action was believed to be the main reason why they have managed to keep COVID- 19 cases deaths down to 350 and infections below 12,000 despite big population.

Ondrej Kobza, an organizer of the party and owner of a cafe in the city, told the AFP news agency: “We want to celebrate the end of the coronavirus crisis by letting people meet and show they are not afraid to meet, that they are not scared to take a piece of a sandwich from their “neighbor, BBC reports.

It was also reported that despite spikes of cases released by WHO, the government of the Czech Republic started allowing public gatherings up to 1,000 people. Recreational establishments such as swimming pools, museums, zoos, and castles can now open without limits on the number of visitors. And people are allowed to dine in, drink and have a night out as restaurants, bars and pubs have been allowed to operate for a month now.

Guests entertained by local musicians, drinking, sharing foods, and singing at the top of their lungs are indeed a celebration people across the globe look forward to when this crisis is over.

BeyoncĆ© leads the nomination with nine nods while her husband Jay-Z lands with five nods. They now share the record...

The Grammy Award winner extends his āLove On Tourā concert in Asia ā with shows in Bangkok, Manila, Seoul, Tokyo,...

American Psychological Thriller āYouā Season 4 is Coming to Netflix in Two Parts this 2023!

The brandās latest campaign encourages consumers to love their jeans for decades, not seasons. LeviāsĀ® has recently launched the latest...

The marriage of these German icons brings in a couple of firsts ā the first-ever aluminum backpack and sneakers. For...

Crunchy and juicy. Whatās not to love about the mouth-watering, crispy fried chicken? Read on to know where you can...