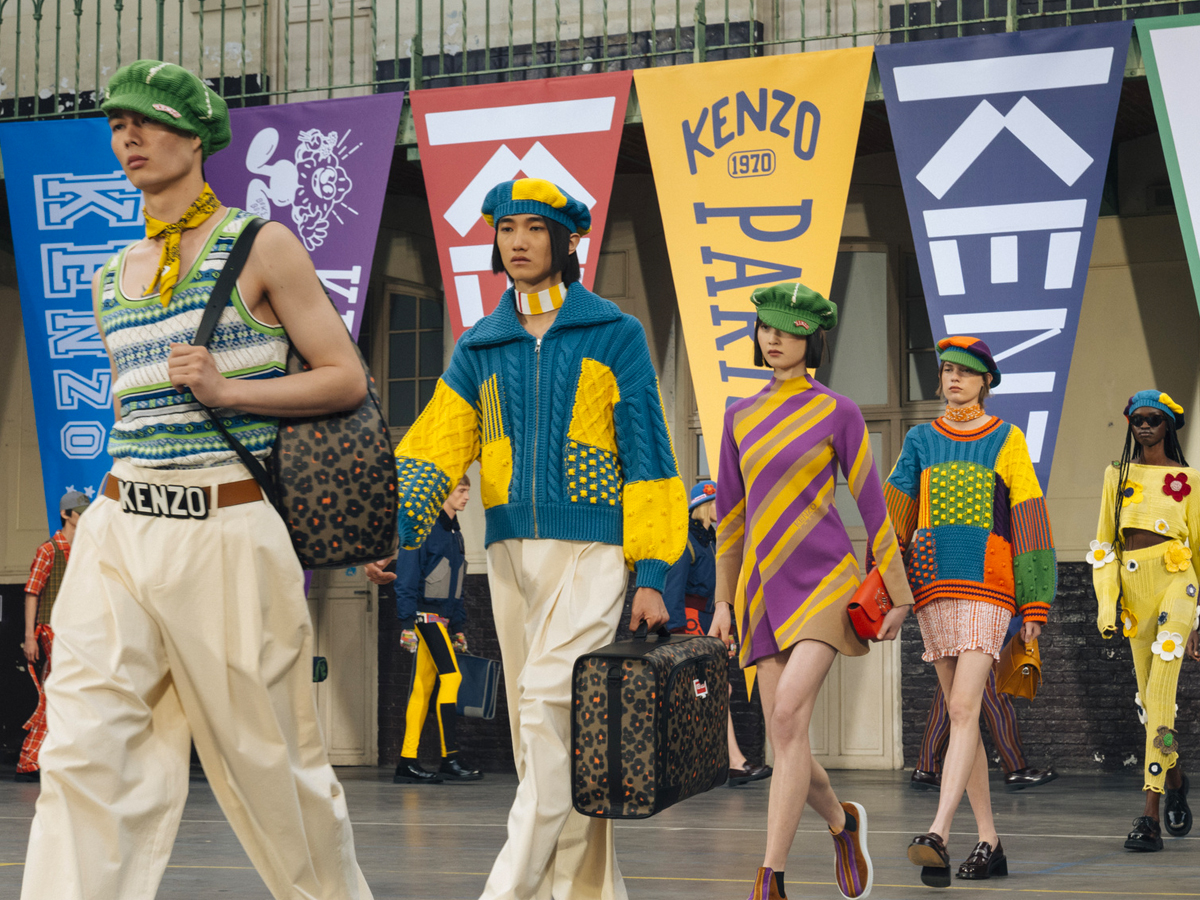 Check it out: Kenzo Spring Summer 2023 MenÆs and WomenÆs Show

After his debut in Kenzo six months ago, artistic director Nigo presents a wonderful fusion of American and Japanese influences ¢ a reinterpretation of retro varsity style for his second menÆs and womenÆs show for the highly-acclaimed fashion brand.

For its Spring/Summer 2023 MenÆs and WomenÆs Show, Kenzo expands and refines the universe established after the first seasonÆs collection. This time, the iconic brand presents a capsule of everyday life founded on an enduring approach to fashion.

Taking inspiration from Kenzo Takada ¢ and his creative ideas that steadily develop from one season to another ¢ Nigo hones the codes of the ready-to-wear by creating a continuity built on the ethos and youth-driven sensibility during his debut.

For this yearÆs collection, the ready-to-wear influenced by subcultural British tailoring and workwear cut sees a range of jackets, preppy blouses, flowy dresses, and skirts that are embellished with embroidered badges with a multitude of archival prints as Ken Z? ¢ the Japanese fashion designerÆs favorite animal that creates a distinct youthful silhouette representing empowerment. The accessories complementing each piece further tout a scholastic look ¢ with the introduction of Mary Janes, derbies, and loafers, Rue Vivienne leather satchels, and structured handheld briefcases.

The collection is further enforced by NigoÆs own KENZO discovery as a teenager and the alluring fashion landscape that surround it ¢ the DC Brand Boom of the 1980sÆ Japan that came with a local influx of casual, pop-driven character labels distinguished by colorful and cartoonish animal motifs. Such contrast then created a multifaceted style environment in Japan: a graphically-driven niche scene imbued with a yearning for the fashion culture of Paris, the spirit of which invigorates the KENZO Spring/Summer 2023 Collection.

The silhouettes of Kenzo Spring/Summer Collection showcase a new interpretation of graphics and patterns from the archives of the founder, Kenzo Takada, which are often characterized by wardrobes composed of tailoring, workwear, dresses, and skirts. These also come with preppy undertones, the suiting silhouette that is built on the subcultural British tailoring values while the brandÆs workwear takes inspiration from the uniforms of the American railway workers and army repairmen of the 1930s and æ40s. The dresses that came along in this capsule are shaped in expressions from the 1970s and æ80s archive that typically comes in soft, long volumes prettified by puffs and flounces, occasionally interrupted by sporty tightness and scanty hemlines. NigoÆs workwear reflects a youthful silhouette that highlights contemporary womenswear ¢ thoroughly engrained in empowerment.

As for KenzoÆs DC Brand Boom theme, the collection is celebrated in intricate intarsia knit, varsity jackets, and gilets with graphic character appliquķ. Nautical influences can also be observed through the presentation of sailor collars, caps, and baton stripes ¢ a nod to the 1980Æs Japanese view of Parisian couture and its elevation of the maritime uniform. The motif is furthermore echoed in wavy checks and ædrippingÆ jacquards, and in naval bunting, which is presented in college pennants employed in jackets, tops, and foulards. Noticeably, the patchworking of flags takes a close reference to Kenzo TakedaÆs love of reinventing his logo and labels ¢ an affinity shared as well by Nigo, who loves adorning garments in the reproduction of labels from the Kenzo archive.

The key component in KenzoÆs Spring Summer 2023 MenÆs and WomenÆs Collection is NigoÆs expansion to denim proposal. In a focused development of denim fabrication and construction, workwear was crafted in highly refined Japanese denim materialized in black, white, and indigo ¢ in various washes ranging from deep indigo to light blue stonewash.

The collection also proposes a new basketball and running shoe that are characterized by the KENZO smile detail. As a high-top and low-top loafers, the iconic Mary Jane of the fashion brand is also added to the City Smile line. Fusing the properties of espadrille and deck shoe, Kenzo introduces a boat shoe and Japanese Zori sandal.

To match the codes of youthful college dressing, Kenzo Spring Summer Collection is complemented with bags (Rue Vivienne leather satchels with matching reflective schoolboy clop fastenings in a variety of colorways, shoulder bags, and new luggage pieces manifested in handheld suitcases and tubular backpacks) and hats (a collaboration between KENZO and M³hlbauer as presented in straw trilby hats, straw visor, bowler hats, sailor hats, and tie caps).See how Nigo steps up to the archive of the houseÆs founder by checking out the live-streamed show at KENZO.com.